The newest edition of the critically acclaimed Alchemical Tarot, by Robert M. Place is a deck that correlates the Alchemical magnum opus and the creation of the Philosopher’s Stone with the trumps in the Tarot.

This is the latest edition of the Alchemical Tarot, based on alchemical symbolism. The art is mostly the same as the 4th and 5th editions, but there are some changes. The background skies are blue instead of the parchment backgrounds found on the previous editions. The World card has changed and there are some changes on other cards. The biggest change is that there are now 80 cards in the deck. Besides the traditional 78 cards there are two versions of the Lovers cards, as in previous editions, and there is a new 22nd trump called Truth.

Truth is based on a vision that Rosemary Ellen Guiley, my partner on the book for the first edition, had after that edition was published. Hermes Trismegistus came to her in night and presented the 22nd trump to her. I have included my illustration of this vision in the deck. 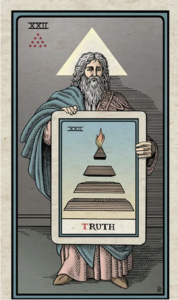 It is recommended that to fully understand the deck you purchase his latest book, The Tarot, Magic, Alchemy, Hermeticism, and Neoplatonism (3rd Edition).

There are no reviews yet.

Only logged in customers who have purchased this product may leave a review.